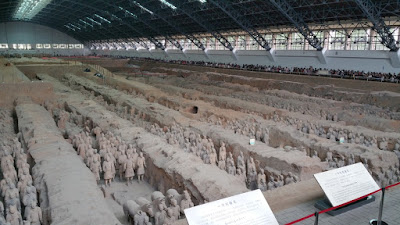 Post-Spring Festival, but pre-summer in New York with my sisters Marilyn decided another vacation was in order. Where? Xi'an, of course!

The moment I signed the contract to teach in China for a year, I knew I couldn't leave without seeing two things: The Great Wall of China (check!), and the Terracotta Warriors. Since Zhangjiajie is blessed to have an airport, a quick weekend trip to see the massive standing army that Qin Shi Huang had built became less of a feat and more of a must.

My Didi driver (like Uber, but for China), and I drove more than an hour outside the city in silence, which is almost always guaranteed considering my Chinese consists of being able to tell people my name, where I'm from, where I teach, and that I want spicy pork with rice, please. He dropped me off in front of imposing gates and we both smiled and chorused, "bye bye!" before he sped off, effectively stranding me by my own wishes. Since I couldn't read the signs but I knew the Warriors had to be in one of the three large buildings facing me after the 10 minute walk down a winding, tree lined path, I made the very Molly Brown decision to start on the right and work my way left.

The first building turned out to be a very cramped museum, full of Warrior recreations (all mobbed by tourists, Chinese and foreign alike); miniature terracotta warriors and horses that I couldn't see properly due to the cell phone flash glare on their small glass cases; and lots of beautifully done, dark plaques, no doubt detailing the history of the complex - I'll never know because the Chinese characters were carved in stone that was obstructed by grandparents and their children's toddlers, a common theme here.
That Saturday was busy. I never knew that old women could push and shove so viciously without changing their faces until I tried to stand at the front of the terracotta army and take a picture. The old women of China are strong. They are ruthless. They are merciless. They have no concern for your health, happiness, or well-being. Don't let their uncharacteristically curly hair and diminutive stature fool you - they are all pointy elbows and hip thrusts.

I walked the entirety of the complex, took pictures from every angle, admired the craftsmanship, came back to the front, and it was the same sh*t, different time.

Fortunately, some very tall, very large, men from the US were also visiting and were able to push themselves to the front. They reached out with sympathetic hands and pulled me up to them so that I, too, could see the army from the front. Hooray for the kindness of strangers who are willing to use their bulk to my benefit.

To their credit, I couldn't have asked for more from the Warriors. Their craftsmanship and number filled the huge pit and made me feel as if the emperor's army were really there standing guard, all these centuries later. The detailed, impossibly life-like horses were arguably my favorite statues, and I agree with all who say that no trip to China is complete without a visit to Xi'an. I could do without all the people, but I've never been much of a "large crowds, big city" kind of woman.

The taxi I found at the end of my Warrior day took me to the city limits and then introduced me to another taxi driver who would take me all the way back to Xi'an city, where my hotel is. I listened to him speak, picked out the important bits, said okay, and got into the other car. By the time I made it back to my hotel, I was exhausted and only wanted a cool shower.

I woke up the next day, Easter Sunday, having talked to my sisters and mom the night before. Was I jealous that they were all in NYC for the holiday weekend doing stuff to prepare for Lemon's wedding? Yes. Am I over it and just excited to see them all in June? No. I'm still jealous.

The loneliness of being an ocean away from everyone I know is usually managed by getting out into nature, spending time with my two foreign friends, reading, Netflixing, getting a massage, or some other lovely activity that occupies my mind and time. However, it sometimes creeps in at inopportune moments.

So, I decided to go to Cuihua Mountain for Easter to spend some time in nature. It was gorgeous. I had an incredible day exploring caves, hiking odd routes, and climbing steep stairs. I went into the Wind Cave and was immediately grateful for the continuous breeze that ran through it. It was a hot easter in Shaanxi Province. I also visited the Ice Cave and was soon shivering.

Due to human events, all the natural ice in the cave has long since melted and been replaced by large blocks of ice to entertain tourists. Still, the natural temperature of the cave was an icy 0 degrees and I was Rocky-style running up the steep steps to exit after staying inside for only five minutes.

I spent the rest of the afternoon marveling at the riches all around me, haggling over price with the random man I met who drove me back to my hotel (I get in cars with strangers in China, it's a thing), and making my way to the airport. All it takes for me to dearly miss Zhangjiajie is for me to leave it, even if it's just for a weekend.

Barely a month later, I decided that another adventure was needed. I love my day to day life of teaching a curriculum that I create for my students, relaxing in my spacious (free) apartment, day drinking at the base of Tianmenshan, and reflecting on who I was, who I am, and who I want to be; however, this is a huge country and I don't want to miss out on exploring it. After all, my time in China's almost over.

For this trip, I decided to be super commercial. I originally wanted to go to Hong Kong, but it proved too expensive, too tricky, and too long a trip for my modest means. Instead, I chose to go to Shanghai to visit Disneyland, my first ever trip to a Disney park. When you wish upon a star...

It was amazing! Sure, visiting the most magical place on Earth solo wasn't ideal, but I've grown very accustomed to enjoying the pleasure of my own company. Bonus perk/pro-tip: most of the rides have a "single rider" line where you can skip all the happy families and snuggly couples and just ride the damn rollercoaster you want without the heatstroke that comes from waiting in line for 2+ hours. Winning.

After my first Disney Day, I met up with some friends who were also visiting Shanghai at a great Mexican restaurant before we went to a bar where they lit the bar on fire before pouring tequila into women's open mouths. Have I missed city life? I'm not sure, but eating tacos, speaking English, and dancing until 4 a.m. with familiar faces was a nice change. It almost felt like being back in the States.

During those first two days at Disney, I: 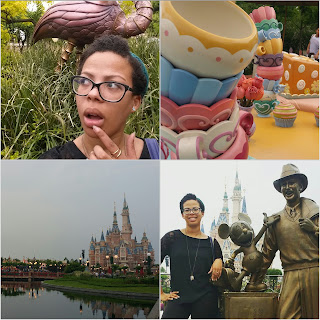 I spent two days in the Park, staying for 9 hours the first day and 7 hours the second. When I waved goodbye to the Mickey Steamboat statue on my way out on the second night, I was genuinely sad to be leaving. "Did you have a magical day?" a smiling cast member asked as I passed by slowly. "Yes! I had an incredible day!" I squealed back with a huge smile, uncaring that this level of enthusiasm is usually reserved only for children under 10 and lunatics.

On my third day (it was the May Day/Chinese Labor Day Holiday), I went to the Bund to see what all the architectural fuss was about. I must admit, I get the hype. I walked the strip for two hours, stopped at a Starbucks for cold tea and wraps (things I can't get in Zhangjiajie), took pictures for randoms, got yelled at in Pudong Development Bank for taking a picture of the gorgeous mosaic ceiling, tried to find the restaurant "M on the Bund" for obvious reasons only to discover that it was closed down, and then ate more western-style food at a different cafe before heading back to my hotel and then to the airport.

I'm still not one for cities and I definitely don't want to live in one as big as Shanghai, but the buildings on the Bund were beautiful, and the views of the space-age looking Pearl Tower were lovely. It was also a nice treat to eat real western food again - all we have in Zhangjiajie is McDonalds (blech), KFC that is highly adapted to an Asian palate (think dark meat chicken wrapped in cucumber), and a smattering of Chinese places that serve "steak." Although I've really grown accustomed to traditional, authentic Chinese food and even have favorite dishes that I'm going to miss when I leave, it was nice to eat tacos and chicken wraps, if only for a day or two.

My travels in Asia have been incredible and I'm excited to keep exploring Zhangjiajie, teaching, and trying new things during my final month or so in China. I feel like I've done so much and also like I haven't done nearly enough. Regardless, I know I'll look back on this year as one of ups and downs, but mostly incredible ups.

I've been able to teach incredible young adults and hear their progress every time we speak; I've gotten to travel around an entire part of the globe I never thought I would; and I've learned a lot about myself that I never would've known had I just stayed in America.

I'm excited to get to NYC for the summer, but I'm so glad I came to China for the year.

Before you comment, THINK: Is it True, Helpful, Inspiring, Necessary, and Kind? If not, reevaluate your comment and don't post until it is. Amoris et lucis, MM