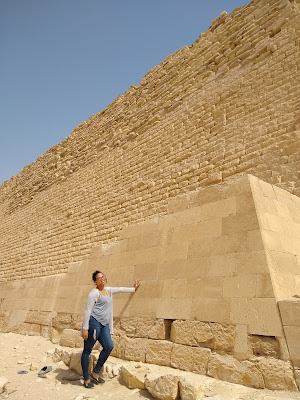 My first Ramadan in a Muslim country is what opened my eyes to the notion that I might love drinks and dancing too much. During the day, Muslims don't put anything in their mouths during Ramadan; not water, not gum, definitely not food, no cigarettes if they're one of the many addicted here in Egypt, nothing. Then, sunset rolls around and they gorge themselves during iftar. It's a sacrifice, but a temporary one. They fast all day and eat all night, but a few things remain the same regardless of the sun's position in the sky during the holiest month for about a quarter of the world's population, things that make it just a bit harder to be a Christian here during it.
As a Catholic Christian, we have fast days, but water is allowed and it's only a few days here and there.

But here, alcohol isn't sold for the entire month, so I had to stock up before the holiday began, which made me look very much like the alcoholic I now feel myself to be since panic slightly seeps in each time I make myself a drink and see my stores deplete well before the end of the holiest month.

However, foreigners can still drink (in secret after flashing their passport), and away from view of any passersby who might glance over at them. Muslims aren't even allowed in bars for the entire holy month. It also means that going out dancing, foreign or local, is out, and there are only 3-4 movie times available for the month since the theaters close for iftar so all the employees can go eat. I don't mind this - traditions and holidays are an important part of every religion and I love the devotion shown here.

It's inconvenient, but who am I to complain that the religion and culture of the country I willingly chose to move to?

Ramadan does have a very special meaning and I think it's important: feel for those less fortunate than you. I do think it's a bit extreme in practice (I've seen my students running around playing soccer, pouring sweat, and then having to sit in the shade and pant because they can't drink water until 6:45 p.m.). We're in Egypt and it's H.O.T. Since the entire Middle East is fairly consistently on fire from March until November, I think there should be an exception for water. Or a ban on playing sports during the day. Either one would appease my "you're all gonna get dehydrated and faint!" soul.

However, while this is my first Ramadan, it isn't my student's or their family's or my Egyptian friend's. I might have Christian concern for them, but this isn't their first rodeo and they know what they're doing, so I have to respect that.

I've found one store that will sell wine and beer to foreigners, I've become more consistent about cooking at home to avoid the many restaurant closures all month, I'm going to friends' houses more to replace movies and dancing, and house parties are where it's at during Ramadan. Adjust and adapt.

There are also things that I absolutely love about Cairo during Ramadan, most notably, how quiet everything is. Usually, to say this city is "bustling" is an understatement. Cairo is ALIVE. Drivers have entire conversations with other drivers without slowing down, taxis honk, dogs wait patiently to cross the street, malls overflow, beaches are crowded, bars and clubs are completely booked up, and general chaos flows throughout the capital on a daily basis. But during the day in Ramadan, the city stills and the usual roar becomes a gentle hum.

I can walk along the streets without being stared at, honked at, or whistled to; I can order delivery or go to a restaurant and get my food in record time because no locals are eating; and I can listen to the wind whip through the desert without the usual chorus of honking and yelling. Everyone's too tired from lack of food and water to make a big hullabaloo on a regular basis. I love it. It's such a nice break from the loud, sometimes pushy, daily life in Cairo that were it not so hard to get the things I want, I would never want Ramadan to end.

But end it will, and with the end, I'm looking forward to my first Eid in a Muslim country. Celebrations and feasts everywhere, I'm ready for it.