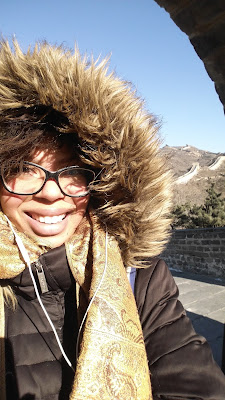 I arrived in Beijing at 1:05 p.m. on January 22, the first stop on my solo, 41 day Spring Festival vacation. After a 52 minute, ¥140, ill-advised taxi ride (I should've just taken the subway), I arrived at King's Joy, a hotel I chose for it's 11 minute walk time to Tiananmen Square.

I check in, unpack a little bit, and prepare to head out and wander around - I've already planned to see the Great Wall and everything else during the next two days, so today's my free, "wing it" day. After gushing via WhatsApp to my sisters about the western amenities in the bathroom, including a toilet I can sit on and a proper shower, I put my down coat back on, take a selfie, and then head out to explore China's capital.

I walk outside, am promptly greeted by Nope Degree weather, and make the quick decision to dash into the McDonald's across the street for warmth.

So now we know, Beijing in January is off the charts freezing.

I order my greasy food, chomp down on it in despair, and stare out the crowded window at the busy sidewalk, thoroughly unimpressed. I decide to call it a total do over, get more chicken to go, and then go back to my hotel for a hot shower, an "I'm cold" WhatsApp message to my sisters, and then a Supernatural Netflix mini-marathon. Tomorrow, I'll be better prepared for it, so it'll be better, I think to myself before I close my laptop late that night and drift off into warm, pillow-top mattress sleep. (My bed in Zhangjiajie can best be described as a board with college-ruled paper on top to make it soft. Yes, I should have invested in a mattress pad earlier in the year, no, I'm probably still not gonna do it.). 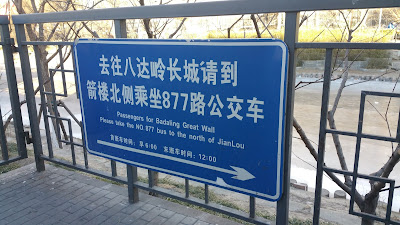 I wake up the next day freshly excited - I'm going to walk on The Great Wall of China today! Head's up: getting to the Wall is hella confusing. I used my 2nd grade level Chinese and Baidu Translate to find the right subway line, then followed signs to find the bus to take me to the Badaling section of the Wall. Another warning: the signs run out quite abruptly, and when they do, you have to cross seven lanes of a busy street to reach the inconspicuous bus on the other side. Be brave, be quick, think of the Dalai Lama.

I kept trying to ask the driver where to buy tickets for the bus, but he just kept telling me to get on. Fortunately, the 12RMB ticket I bought on the bus wasn't exactly a "pull over and let me off" deal breaker price. 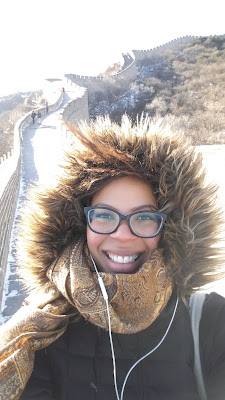 We drove for an hour, stopped in what seemed like a random, abandoned parking lot, and then we had to walk for about 5 minutes in the bitter cold. It's a lot more expensive to take the cable car up to a tall point on the Wall and then walk down than it is to just walk the entire thing, so that's what my "traveling on a budget" self did. I froze and took a long gander at the human marvel before me for almost two hours.

Each time I wanted to take a picture of the incredible, long, winding Wall, I had to mentally prepare myself (and my fingers) for the painful cold to come, count to three, whip my hands from my pockets, snatch my phone out of my bag, and quickly snap photos before I lost a digit to frostbite. This is only mild hyperbole. It was -6 Fahrenheit plus wind chill and my gloves were not ready for it.

The next day, after a long, warm recovery night in my hotel, I decided to walk over to see Tiananmen Square and the Forbidden City. Squee!

I walked outside, this time in even more layers, and after 15 minutes of trying to figure out how to cross the street (I'm living in the country here in China), and another 10 minutes of trying to figure out which huge plaza actually is Tiananmen Square, I finally reached it. After seeing the Wall, I was mildly disappointed in realizing that it is, indeed, just a huge city square. Plus, I'm here in January, the dead of winter, so there are few tourists and not even that many locals milling about, so it's fairly empty.

I walk through and snap a few pictures before making the 20 minute walk onward toward the Forbidden City. Again, it's freezing and fairly empty, so I don't think I got the full "experience," but it was pretty lovely even so.

Overall, I much prefer the mountains, forests, and hometown vibes of Zhangjiajie to the hustle and bustle of Beijing, but the impressive and seemingly endless Great Wall made the entire trip worth it.
Email Post
Labels: adventure China Forbidden City Spring Festival The Great Wall of China Tiananmen Square travel
Location: Beijing, China

Before you comment, THINK: Is it True, Helpful, Inspiring, Necessary, and Kind? If not, reevaluate your comment and don't post until it is. Amoris et lucis, MM